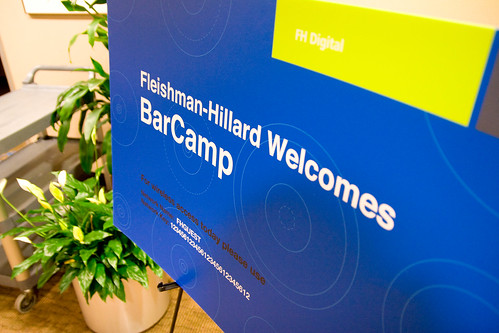 BarCamp DC has come and gone. I’m still recovering from an event that exceeded every expectation I’d set. Justin Thorp, Jackson Wilkinson, and I (along with a handful of others) managed to coordinate sponsors, design and print some awesome t-shirts, and handle 100+ attendees. Justin did a fantastic job with promotion, and Jackson rocked it as an emcee.

Response to the event has been overwhelmingly positive. For the latest reviews, check out the Technorati search results. A few choice quotes:

Not since the heyday of Netpreneur have there been so many people in one DC room so excited about what’s happening online.

Despite getting off to a late start, the event went fairly smoothly. Many thanks to Matthew Bradley (of Grassroots Enterprise) for stepping up and writing (and re-writing) the session schedule, Nick O'Neill for filming some of the sessions, and Justin Stockton, Rodney Degracia, and others for manning the registration table.

We are also deeply indebted to our hosts Fleishman-Hillard and our many sponsors for helping us put the event together. None of the food, t-shirts, or book giveaways would’ve been possible without their generous donations of money and time.

The event wasn’t without criticism, though. A lack of design sessions and “this is too organized for a BarCamp” were common gripes. I agree that these are legitimate complaints and assure everyone that we take this sort of feedback to heart. These type of events are really for the community and what the community wants, the community deserves.

And with that, a little bit about the DC tech community. When I started Refresh DC in February of 2006 (has it been that long?), I had no sense of a community existing in DC. The only people I knew were those with whom I worked. Slowly but surely, month after month, Refresh starting building a loyal following. Somewhere along the way, Refresh tipped and we began attracting ~50 people per month.

BarCamp shattered my expectation of the breadth and depth of the tech community in DC. I’d say there was easily 2/3rds of the audience that I didn’t recognize. This community runs deep. Justin has expressed his hope that BarCamp will be the tipping point that brings this until-now fractious community together. I’ve overheard several people (Mike Cummins of the AOL Developer Network being one of them) state that DC has the potential to be an East Coast version of San Francisco.

I firmly believe that BarCamp DC was the start of something big and I’ll be damned if I’m going to let that wave pass us by. As I posted over on Twitter the night after the event, I am in awe of and humbled by the passion and enthusiasm of the sponsors, volunteers, and participants who made BarCamp DC an event to remember. Thank you all.